BSA # 19-138M, 1 West 29th Street, Marble Collegiate Church, application for a Variance pursuant to Section 72-21 of the Zoning Resolution of the City of New York and Section 666 of the New York City Charter

Re:     BSA # 19-138M, 1 West 29th Street, Marble Collegiate Church, application for a Variance pursuant to Section 72-21 of the Zoning Resolution of the City of New York and Section 666 of the New York City Charter, to allow an enlargement to the Church’s existing building and complex.

At the regularly scheduled monthly Community Board Five meeting on Thursday, June 13, 2019, the following resolution passed with a vote of 40 in favor; 0 opposed; 1 abstaining:

WHEREAS, Marble Collegiate Church, located at 1 West 29th Street, has applied to the Bureau of Standards and Appeals (BSA) for a variance from the Zoning Resolution’s rear-yard requirements, in order to allow for an enlargement of the Church’s existing building; and

WHEREAS, Marble Collegiate Church was built in 1854 and is the oldest continuously operating protestant congregations in the United States; and

WHEREAS, The Existing Building is located partly in a C5-2 district and partly in an M1-6 district within the Madison Square North neighborhood and is an individual New York City landmark, designated as such in 1967; and

WHEREAS, Marble Collegiate Church is proposing an enlargement by expanding its facility to the west to create a Church Fellowship Hall and community facilities at the base of a commercial tower on lot 30, block 831, having an address at 3-7 West 29th Street; and

WHEREAS, Marble Collegiate Church has partnered with New York based developer HFZ Capital to develop such facility, and would retain ownership of the newly created community and office space to be located on the cellar, second and third floor levels of the tower; and

WHEREAS, The variance is needed to modify the applicable provision of the Zoning Resolution pertaining to a rear yard (ZR Section 43-26) to accommodate the Proposed Enlargement; and

WHEREAS, Marble Collegiate Church has roughly 4,000 members and hosts hundreds of congregants each Sunday for services and other fellowship meetings currently held at 276 Fifth Avenue; and

WHEREAS, Currently, members must exit the Church after services and walk to rented space directly north of the Church, at 276 Fifth Avenue, for fellowships and other church events; and

WHEREAS, The applicant claims this poses a difficult transition and discourages members from attending activities after Church, especially for young children, the elderly, and the visually impaired; and

WHEREAS, The applicant is proposing to connect the existing Church structure to the new enlargement located at the base of a new office tower by constructing a 4 stories structure on the rear year; and

WHEREAS, The new office tower will be a block-through tower with frontage on West 29th Street and West 30th Street; and

WHEREAS, The Church and HFZ Capital have entered a Declaration of Zoning Lot restrictions to merge lots 28, 29, 30, 48, 49 and 33, and at the present time these lots have been merged; and

WHEREAS, According to statements by Meenakshi Srinivasan, counsel to the applicant with the law firm of Kramer Levin Naftalis & Frankel LLP, HFZ Capital may also be the fee owner or the owner of air rights for lots 20, 26, 50, 51 and 52; and

WHEREAS, HFZ Capital and the Church entered into a light and air easement agreement on July 13, 2018 to allow the new enlargement and tower to reduce access to required access to air and light at the detriment of the Church; and

WHEREAS, HFZ Capital and the Church entered into an ingress and egress easement agreement on December 3rd 2010 on which exhibit C shows three areas of easement along the west wall of the church, and states “Those portions of the building(s) situated on Block 831 Lot 33 which adjoin connect, abut and/or share entrances, doorways, portals or any other types of means of ingress or egress into the building(s) located on or about Block 831 Lot 30 which are in existence today or shall be created now or at any time in the future are covered by this Easement”; and 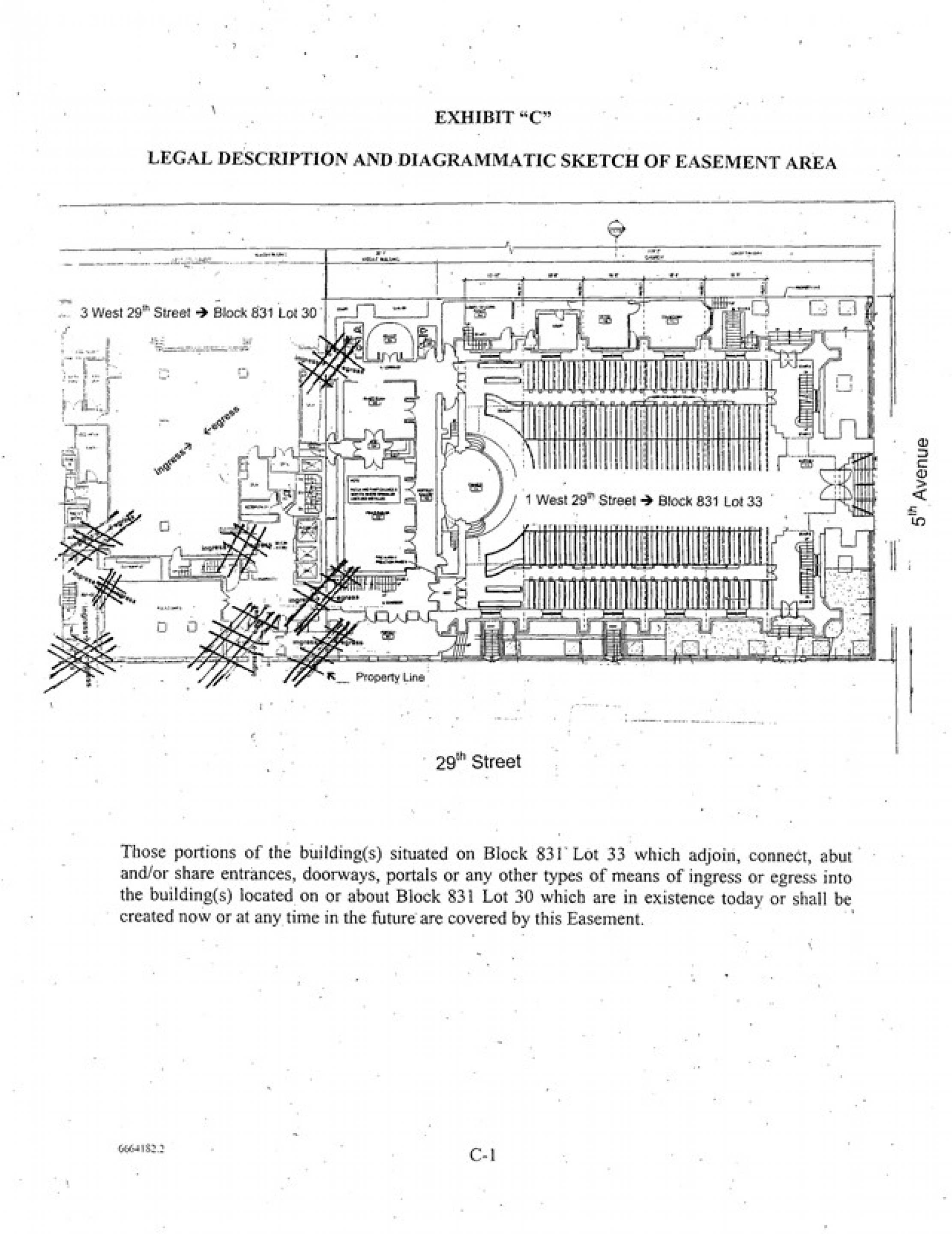 WHEREAS, Although the church’s 61’1’’ long western wall will abut the new tower, the Church wishes to construct a structure on the rear yard to provide access to the enlargement; and

WHEREAS, The applicant is requesting relief from rear yard requirements through a variance to modify the provision of the Zoning Resolution, ZR Section 43-26; and

WHEREAS, The applicant states that the need for the BSA application arises from a confluence of factors related to the Existing Building’s history of development, its configuration on the Church Lot, its landmark designation and current zoning regulations that were adopted after the construction of the Existing Building, specifically to avoid disrupting the Church’s interior space; and

WHEREAS, The proposed connector would be approximately 1,400 square feet and would connect the third floor of the Church to the second floor of the enlargement, and would include the following alterations:

(1) Adding two elevators and mechanical rooms on the cellar level;

(2) Adding two elevators, landing, and stairs on the first floor;

(3) Adding a landing and stairs “encroaching into the rear year which would require a variance,” on the second floor;

(4) Building elevators, landing, and stairs “encroaching into the rear year which would require a waiver,” on the third floor;

(5) Building two elevators, a landing, and stairs at the attic level which would require a waiver; and

WHEREAS, This new structure is to be located on the rear yard of the church, will be visible from 5th Avenue, and will obstruct eight windows on the adjacent property to the north; and

WHEREAS, The Church was granted a COFA (Certificate of Appropriateness) by NYC Landmarks Preservation Commission issued on June 7, 2016 (LPC 17-6458) and amended at staff level and without review by or notification to Community Board Five on June 5, 2019 under COFA 19-40489; and

WHEREAS, These five findings are:

(a) that there are unique physical conditions, including irregularity, narrowness or shallowness of lot size or shape, or exceptional topographical or other physical conditions peculiar to and inherent in the particular zoning lot; and that, as a result of such unique physical conditions, practical difficulties or unnecessary hardship arise in complying strictly with the #use# or #bulk# provisions of the Resolution; and that the alleged practical difficulties or unnecessary hardship are not due to circumstances created generally by the strict application of such provisions in the neighborhood or district in which the zoning lot is located;

(c) that the variance, if granted, will not alter the essential character of the neighborhood or district in which the zoning lot is located; will not substantially impair the appropriate use or development of adjacent property; and will not be detrimental to the public welfare;

(d) that the practical difficulties or unnecessary hardship claimed as a ground for a variance have not been created by the owner or by a predecessor in title; however where all other required findings are made, the purchase of a zoning lot subject to the restrictions sought to be varied shall not itself constitute a self-created hardship; and

(e) that within the intent and purposes of this Resolution the variance, if granted, is the minimum variance necessary to afford relief; and to this end, the Board may permit a lesser variance than that applied for; and

WHEREAS, Supporting case law, courts have ruled that educational and religious institutions are exempt from the burden of the proof of Finding (a), as stated in Cornell Univ. v Bagnardi, 68 N.Y.2d 583 (1986), and

WHEREAS, Finding (b) shall not be required to be made for a non-profit organization, under which the Church falls; and

WHEREAS, Finding (c) is not met, as the proposed variance would "alter the essential character of the neighborhood or district in which the #zoning lot# is located" by facilitating a glass tower enlargement of at least 300,000 square feet on the merged lot that would be 32 stories, as represented by the applicant’s representative in a public hearing held by the Land Use, Housing and Zoning Committee of Community Board Five; and

WHEREAS, Although the applicant claimed that they did not have knowledge of the bulk, massing, or design of the remaining portion of the tower at the time of the CB5 committee hearing, information publicly available on the website of the project’s developer, HFZ Capital, advertises a “proposed development, which will consist of more than 600,000 square feet of office space,” with a supertall glass tower rendering that would irrevocably alter the character of the block as well as the adjacent Madison Square North Historic District; and

WHEREAS, Finding (c) is not met for an additional reason, as the proposed variance would “substantially impair the appropriate use or development of adjacent property" by blocking eight windows on the adjacent property; and

WHEREAS, Finding (c) is also questionable because the enlarged development would be detrimental to the public welfare due to an easement agreement between HFZ Capital and the Church that would allow for reduced access to air and light and would cast shadows on the Church, light-sensitive historic structure and individual landmark; and

WHEREAS, Finding (d) is questionable because the practical difficulties or unnecessary hardship claimed as grounds for the variance have been created by the Church for electing not to create a penetration in the existing 61’1’’ long western wall that would result in a compliant connection, for reasons that pertain to a design choice rather than any existing code or regulation enforcement; and

WHEREAS, The BSA should be reminded that the Church and the developer have entered into an ingress and egress easement agreement permitting such connection to be created at various locations without the need of a variance; and

WHEREAS, The BSA should note that zoning-compliant egress located at the cellar or third floor levels of the Church would not cause a disturbance to the Peale Parlor Room, which is located on the first floor of the church, which has been cited as the reason for the Church’s design preference; and

WHEREAS, While the applicant is exempt from findings (a) and (b), Finding (c) is not met for more than one reason, and Finding (d) is not clearly met in the opinion of Community Board Five, failure to meet any single finding is sufficient grounds for a BSA denial; therefore, be it

RESOLVED, Community Board Five recommends denial of the application by the Marble Collegiate Church, located at 1 West 29th Street, for a variance from the Zoning Resolution’s rear-yard requirements, in order to allow for an enlargement of the Church’s existing building in order to accommodate access to a new community facility located at the cellar, second and third floor levels of a planned adjoining tower.